Everything You Need to Know About Basketball Court Dimensions

Of the two major American-invented sports — baseball and basketball — only one has gained worldwide popularity. We play baseball across parts of the globe, but we play basketball worldwide. You can play with as few as two people and as many as ten. Shoot hoops indoors and outdoors and on any surface hard or flat enough to bounce a ball.

Indoor courts are usually made from hardwood, though other, more easily-maintained surfaces are gaining in popularity. Outdoor courts can be either asphalt or concrete. You can put a permanent basketball court just about anywhere you would like. Don’t have the room for a full-length court? Fitting just a half court into your driveway, backyard, or commercial gym would be just as useful.

So, have a space in mind and wondering “What are the dimensions of a basketball court?” Let’s take a look at the standard sizes for every level of basketball, from high school all the way up through international competition.

The National Basketball Association, better known as the NBA, boasts the largest court dimensions of any level of basketball — domestic or international. The outer dimensions are 94 feet long by 50 feet wide. The half court line is, as the name would suggest, halfway between each end line. In the middle of the half court line is a tip-off circle with a six-foot radius, which often sports the home team’s logo.

The key is 16 feet wide and 19 feet from the baseline to the foul line. A semicircle with a six-foot radius extends from the foul line. Some courts have the other side of the half-circle drawn in a dotted line inside the key to complete the circle and create a clear boundary for any jump balls.

Inside the key, a four-foot arc is aligned with the center of the basket to designate the restricted arc. If a defender is inside this semicircle, he cannot draw a charging foul. Along both sides of the key, lines are drawn three feet apart to create the standing positions for other players during a free throw attempt, starting with a box that is seven feet from the baseline and one foot wide.

Outside the key, the three-point line forms an imperfect arc stretching one side of the baseline to the other. The arc isn’t a perfect circle because it would run out of bounds on the sides of the court.

Instead, the three-point line runs in a straight line from the baseline out 16 feet, nine inches, at which point the line begins to curve. The straight lines are an even 22 feet from the center of the basket, and on the arc, the distance is 23 feet and nine inches.

Starting at the baseline and running 28 feet toward the center of the court, a line bounds the team bench area. The line also acts as the starting place for inbounds passes after timeouts and fouls. 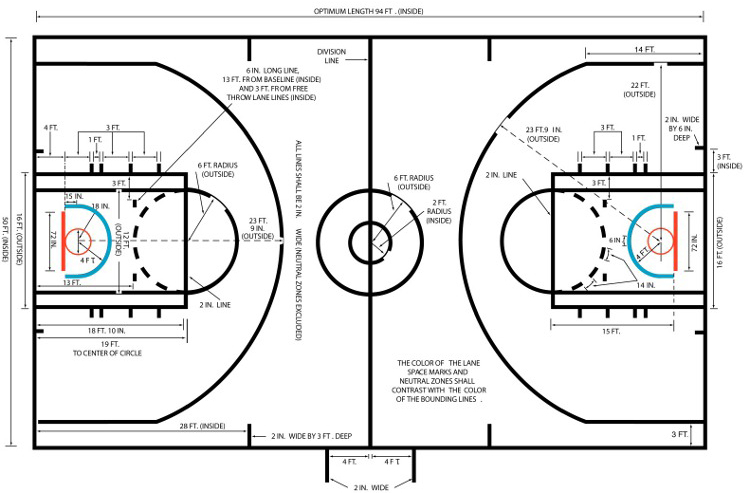 The Women’s National Basketball Association or WNBA’s court dimensions are identical to the NBA court in every way except the three-point line. Instead, the distance is equal to the International Basketball Federation (FIBA) at 22.15 feet from the center of the hoop. WNBA teams share arenas and playing surfaces with the NBA, which is why it’s no wonder the court dimensions are so similar.

National Collegiate Athletic Association or NCAA basketball courts have similar dimensions to the NBA and WNBA, which include the:

That said, there are a few significant differences in the dimensions of the NCAA court. For starters, the key is only 12 feet wide, rather than 16. The first box on the side of the key is only six feet from the baseline, not seven. The restricted area under the basket is also one foot smaller, at three feet in diameter rather than the NBA’s four.

However, the most recognizable difference between the NBA’s court dimensions and the NCAA’s is the distance of the three-point line. The NCAA three-point line is only 20 feet, nine inches from the center of the basket. Because of the smaller diameter, it is a continuous arc from one side of the baseline to the other, with no straight lines necessary to create space on the sidelines.

The difference in three-point line distances is the biggest adjustment for shooters to make as they begin their professional careers, and also why it’s so difficult to project how well a player will shoot in the pros. 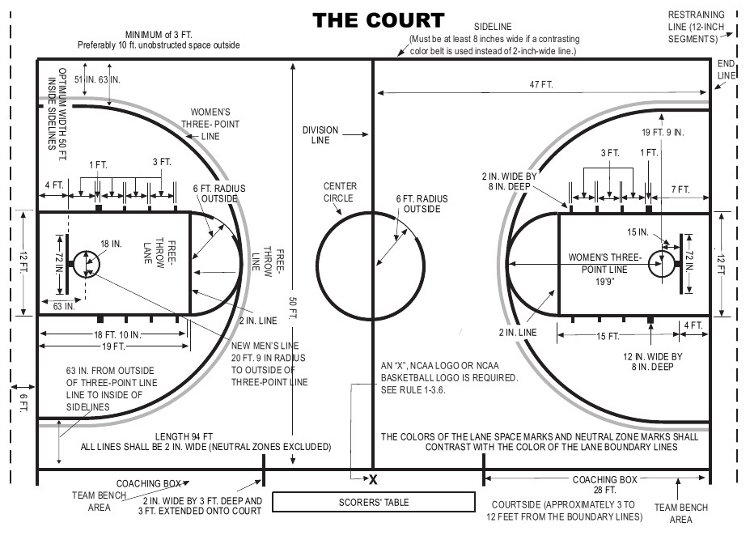 High school basketball courts are a little different from their college and professional counterparts. The most noticeable difference is that the court is a full 10 feet shorter, measuring only 84 feet. However, there are some similarities. The court is still 50 feet wide. The basket is also 10 feet off the ground.

The tip-off circle has a six-foot radius, just like the big kid courts, and while the high school landscape isn’t as standardized as college and professional basketball, the backboard is supposed to have the same measurements as the NCAA and NBA.

Just as in college and professional basketball, the foul line is 15 feet from the backboard, and the key is 19 feet long. It’s also the same 12 feet wide as the NCAA — four feet narrower than the NBA and WNBA. 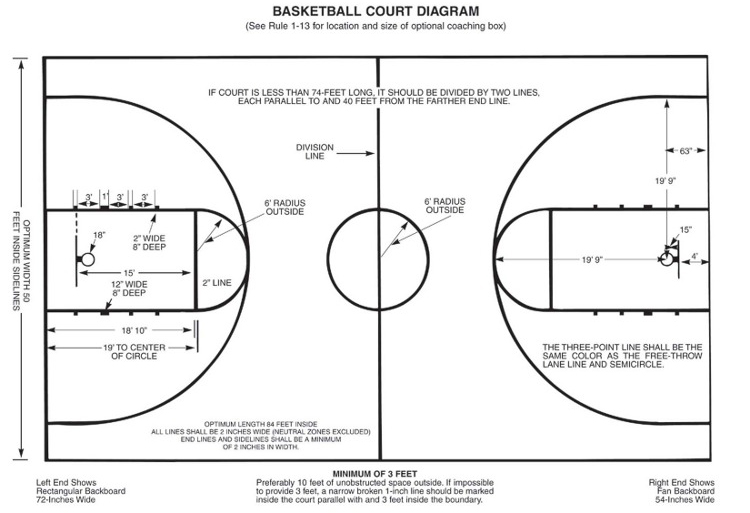 FIBA courts are an even 28 meters long, which converts to almost 92 feet. The 15-meter width converts to just over 49 feet. The tip-off circle is a bit smaller as well, at 3.5 meters in diameter. This difference translates to a radius of about five feet, seven inches.

The key is almost the same size at 5.8 meters long and 4.8 meters wide. These numbers convert to within a few inches of 19 and 16 feet. The basket is 1.2 meters, or almost four feet, in from the baseline, which puts the foul line at 4.6 meters — 15 feet — away. The restricted area under the basket is 1.25 meters or just a shade more than four feet in radius.

The basket is still 10 feet off the ground, which means the biggest difference is the three-point line. At the top of the arc, the three-point line is 6.75 meters from the center of the basket or 22.15 feet. This measurement works out to about 22 feet, two inches. The FIBA three-point line, which has also been adopted by the WNBA, is over a foot and a half closer than the NBA line.

The History of Basketball Court Dimensions

Since its invention in 1891, basketball’s court dimensions have varied. Let’s look at some of its historical changes, as well as answering that nagging question — “Why are basketball hoops 10 feet high?” — below:

The Story Behind the 10-Foot High Hoop

It would appear the 10-foot basketball hoop is the result of a careful calculation that considers the human anatomy and mechanics of the game. After all, even the tallest players today have to jump to dunk a ball, and a ten-foot high rim gives a comfortable target to shoot for at a distance. But as we see so often in history, the truth is much more mundane.

When James Naismith dreamed up the game in Springfield, MA in 1891, the railing he chose to hang the baskets on was ten feet off the ground. So, while everything else about the sport has changed since that first game, the baskets are still right where Dr. Naismith hung them.

The History of the Three-Point Line

The three-point line is arguably the most recognizable aspect of a basketball court’s dimensions and part of the reason why is attributed to the history surrounding this semicircle.

The first instance of the three-point line appeared in the American Basketball League in 1961, a full 70 years after Dr. Naismith invented the game. The line was added to increase excitement, but the league folded in just one and a half seasons, so the idea never had a chance.

In 1967, the next competitor to the NBA arrived. The American Basketball Association, or ABA, instituted the three-point line from the very start, and it was a huge success. The ABA had many exciting innovations that produced a better product for the fans. But ultimately, there was not enough room for two professional basketball organizations, so the NBA and ABA merged in 1976.

The three-point line, however, was not included in the merger! The decision-makers in the NBA at the time were too stubborn to adopt such a radical change. They held out for three years before implementing the three-point line in the 1979-1980 season. The NCAA didn’t integrate it until 1986, and it didn’t arrive on high school basketball courts until 1987.

That isn’t the end of the story, however. The line was moved closer for three seasons in the ‘90s to try to boost scoring, but it was quickly moved back to its original place. Taking the idea to the extreme, the NBA has even admitted to having discussions about a four-point line. Ultimately, we’ll believe it when we see it.

In the early days of professional basketball, the game was played inside an actual cage. The reasons were more about practicality than about safety. The rule for who got to inbound a ball that left the court was “whoever got to it first,” so organizers took to putting up a cage so the ball could never go out of bounds in the first place.

Those first basketball courts were about a third smaller than they are today, and the cages provided a physical boundary and an extra immovable for savvy teams. Could you imagine how much different the game of basketball would be today if those cages had stuck around?

Today, basketball courts at all levels share a common design for the key — a rectangle measuring either 19 feet by 16 feet or 19 feet by 12 feet. However, this was not always the case. From the creation of FIBA in 1956 until 2010, the key was a trapezoidal design that was significantly wider at the baseline.

Another design of this feature is responsible for the name “key.” Have you ever thought about how a rectangular area under a basket got such a random name?

The reason is that the original area was much narrower, while the circle surrounding the free throw line was the same size. These two factors combined to create a shape that resembled an old-fashioned key. In 1951, the key was widened to 12 feet and later to the 16 feet we see now in the NBA and FIBA.

While the term lives on, time has erased any record of its design and original reference. And for the record, the official name for this feature is “free throw lane,” which isn’t a phrase many of us hear often.

And that’s a wrap on the history of basketball’s court dimensions.

Build Your Basketball Court With PROformance

Perhaps you don’t have 94 feet of flat asphalt or indoor floor space. Don’t worry, because residential half court setups can be just as fun. And whether you are looking to paint your court or apply a pre-made solution, sticking to the official dimensions will take your pickup games to the next level.

Take a look at our selection of goals, nets and accessories to bring your home’s court together. You’ll have a hard time dragging your kids off the court as they spend hours posting up like Boogie, slashing like LeBron and launching it from deep like Steph.

Free Shipping on all PROview and PROforce Hoops 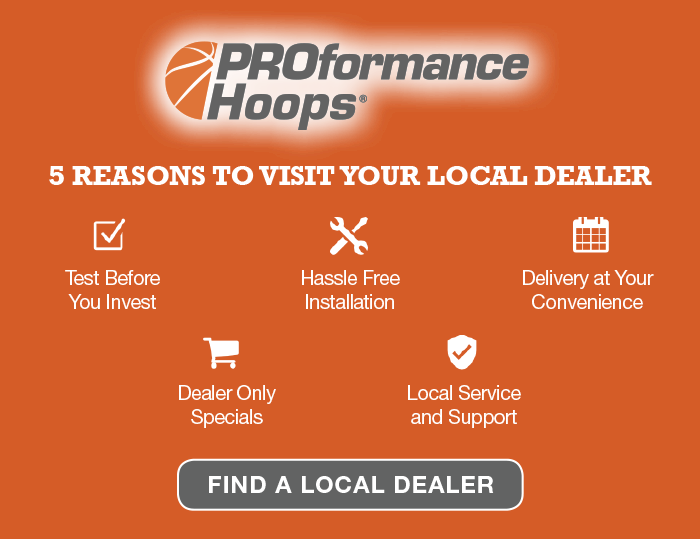